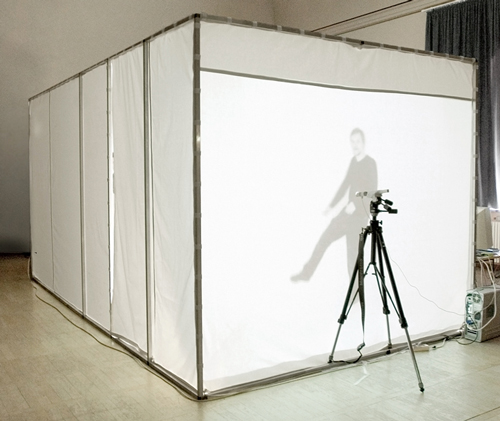 A mobile room in the size of 5 m x 2.6 m x 2,5m defines the space where an acting person is being tracked and recorded. The acquired tracking data and its references to the recorded video are saved in a database. According to this, the database grows with every new user. One side of the room is used as both, a projection canvas and the location from where a video camera points at the user. Gazing at the canvas, the user can see a projection showing the movements of his predecessors that is generated by combining their specific video data. This selection is made by comparing the users ongoing tracking data with the existent data in the database. The video showing the closest correspondences is selected and displayed. As the tracking data is compared permanently for every single video frame, a new video will be selected once the difference of the compared tracking data goes beyond a certain threshold. As a result, the user gets a reconstruction of his own movements by the combination of movement fragments of preceding users.